For the first part of the work, prior to the exhibition, I collected wishful thoughts, ideas, toasts and statements from all kinds of different people surrounding me, by asking them ‘to what shall we raise our glass for you?’. I was not looking for common toasts but for an individual statement which had personal significance for each person. The wishes were written down by hand in a book and translated into English and Russian. This book was the central part of the installation in Moscow and was the basis for the second part where the visitors of the exhibition were asked to participate.

The work questions German and Russian clichés and habits we think we know from each other. The image of throwing glasses was communicated among many other stereotypes about Russia in the German Schlager ‘Moskau’ from 1979, performed by the pop-act Dschinghis Khan. The song also achieved enormous underground popularity in the former Soviet Union. In 2009 Moscow hosted the Eurovision Song Contest and the song was played at the official opening. These stereotypes of vodka-drinking Russians and Schlager-listening Germans build the outer structure of the work, but at the same time, there is a shift from this framework to the inner content – from superficial patterns to very individual stories. That creates a sense of familiarity between individuals who never met each other. 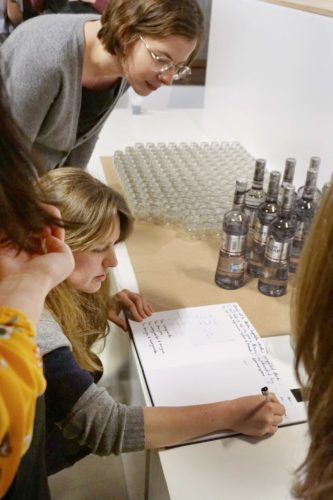 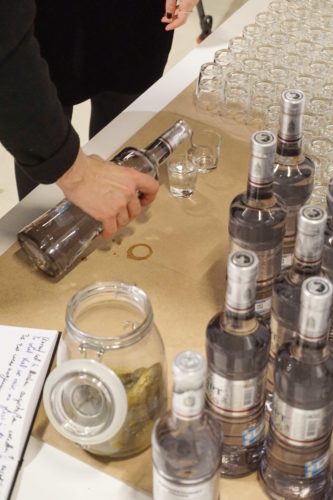 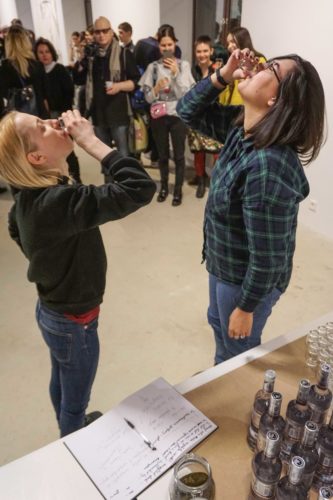